What is Autoflower Seeds

Autoflower seeds varieties automatically switch from vegetative growth to the flowering stage based on age, as opposed to the ratio of light to dark hours required with photoperiod dependent/short-day strains. Many autoflower seeds will be ready to harvest in less than 10 weeks from seed. Dwarf varieties can have short stature while still giving decent yield. Conversely “super autos” can take over 100 days to mature and can reach over 6 feet tall.

In botany, a ruderalis plant is one that can grow despite the environment, being able to withstand harsh conditions.
This makes sense as this subspecies of cannabis is highly resilient and enduring. Native to the harsh climates of Russia, central Europe, and central Asia, ruderalis was officially identified in the wild regions of South Siberia by Janischewski, a Russian botanist, back in 1924.

The origins of autoflower seeds are still debatable. The strain Lowryder by breeder The Joint Doctor was the original large scale marketed autoflower. Lowryder contains genetics from a Mexican strain that was referred to as Mexican Rudy and is believed to be created from a cross between a Mexican Sativa and a Russian Cannabis ruderalis. Another theory is that the early genetics came from the first oilseed hemp variety called Finola, which was developed from Russian stock in Finland during 1995.

These early hybrids with large amounts of C. ruderalis genes were lacking some of the finer qualities of high-grade cannabis strains available.
Further hybrids from these ruderalis dominant strains were created using some of the more popular and standard photo-period sensitive strains. Since the first mass-market autoflower seeds, Lowryder, many improvements have been made by breeders. Because the effect was weak when consuming it due to its low THC levels, autoflower seeds weren’t popular among recreational users.

A couple of years after its characteristics became known, autoflower seeds strains became of high interest to cannabis breeders. Breeders started developing ruderalis hybrids that had high THC or CBD levels and only needed around 9 weeks to completely mature. These hybrids became known as Autoflower seeds, for its ability to flower automatically without depending on darkness, like normal photoperiodic strains.

Nowadays there’s not much difference between photoperiodic and autoflower strains (other than their flowering conditions, obviously). You can find strains with the same THC and CBD levels in both versions (auto and photoperiod). There even are autos that can be stronger than some photoperiod strains and can have up to 27% of THC.

The newly produced strains of autoflower seeds have proven that they can produce quality medicine comparable with classical short-day strains. Breeders have reported THC content around 25% in some newer varieties while many varieties also have high CBD content. The advantages that autoflower seeds breeders report with their plants include:

There continue to be some photoperiodic cannabis growers that insist that autoflower seeds are simply a fad and produce subpar flowers. The number one reason for these feelings is the understandable disappointment many had with the results of the first autoflowering strains.

Also commonly argued is that when growing indoors, growers already can initiate flowering with photoperiod/short-day plants at will by changing the light cycle. Another concern is the overall yield of autoflower seeds which was really low in the first autos (yielding around a half ounce per plant), although modern autoflowering strains can yield up to 100 g or more.

Creating true autoflower seeds from two quality, true breeding autoflowering parent plants are easy for most. Breeding new autoflowering strains become more difficult when attempting to make a hybrid with a non-autoflowering strain. Some photoperiod/short-day cannabis strains are heterogeneous – containing the recessive day-neutral or autoflowering genetics along with the dominant short-day genetics.

However, a proper list of such strains is not yet available so most breeders treat all short-day plants as homozygous dominant.
A true autoflower is homozygous recessive for day-neutral genetics. Therefore, most crosses between classical photoperiod/short-day strains and autoflowering seeds produce few or no autoflower progeny in the F1 generation.

Regardless of whether the F1 generation produces autoflowering plants, the higher-performing and similar plants need to be recrossed. This F2 generation will contain approximately 25% of homozygous recessive plants which are autoflowering. Still, the few autoflower seeds produced are not always stable and may require further stabilization. Further complexities with stabilizing autoflower seeds have previously led to non-autoflowering and low-quality strains making it into the market. 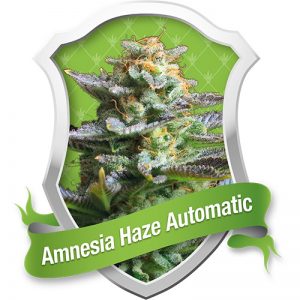 Information on this page provided by Wikipedia.org

Get a 20% discount on all seeds. Plus get FREE seeds with every order! Use coupon code at checkout: 420 Dismiss